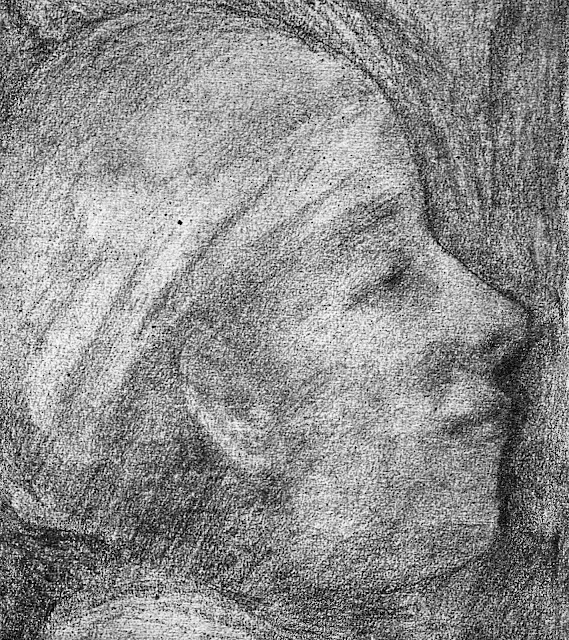 This was the first of many "automatic" drawings by Fitzroy — always faces, and never anyone she knew. Dr. Charles Cory, professor at Washington University, described the case in an article published in The Journal of Abnormal Psychology in February 1920. Dr. Cory believed Fitzroy's automatic drawings originated from her unconscious mind. To others, the mysterious drawings were evidence of psychic phenomena. 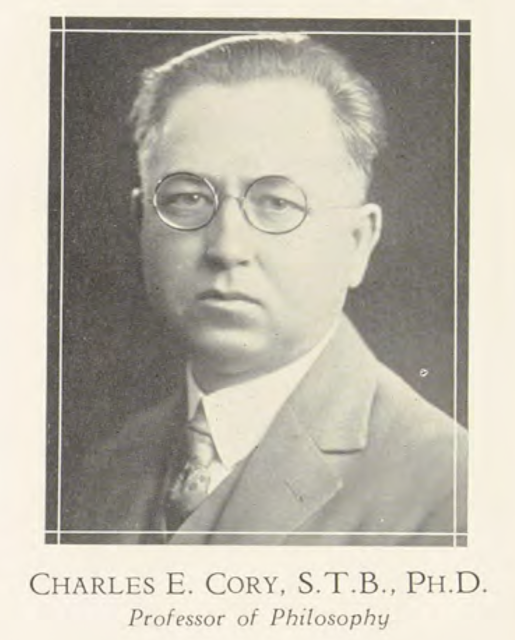 Charles Edward Cory was born in the small village of Thornburg, Iowa, on December 6, 1878. A remarkable student of philosophy and theology, he earned his Ph.D. at Yale in 1904 and his B.S.T (Bachelor of Sacred Theology) from Harvard in 1907. The same year, he joined the faculty at Washington University in St. Louis as a lecturer of philosophy, being promoted to professor in 1920 and head of the department in 1921. He remained at Washington until his retirement in 1949.

Throughout his career, Dr. Cory had a sustained interest in spiritualism. Many of his published works focused on psychoanalytic interpretations of abnormal phenomena, such as dissociative identity disorder (or, as he called it, "co-consciousness"). He also expressed a deep interest in automatic writing and developed a friendship with the alleged psychic medium Pearl Curran. Mrs. Curran wrote many novels and poems by (supposedly) channeling the spirit of a deceased 17th-century English woman named Patience Worth. Curran was friends with Mazie Fitzroy, and it was probably through this connection that Cory met the pencil artist.

THE CASE OF MAZIE FITZROY

When Mazie Fitzroy came under the attention of Dr. Cory, she was 50 years old, never married, and in "delicate health" for several years. She was "unusually fanciful" in her thinking and had a vivid imagination that sometimes resulted in hallucinations. She was a trained musician and, on several occasions, music was the instigator of her hallucinations. When Fitzroy turned 20, she began to lose her hearing. So, she abandoned music and pursued fine art (with a focus on drawing) and worked in a studio for several years.


The mysterious drawings began much later, around 42 years of age. When settling down to begin a drawing, she would go into a trance. Her hand would then immediately take over and begin sketching a portrait. Fitzroy asserted that she never knew what the drawing would end up looking like, nor who the person was in the final product. Each portrait would take between six and ten minutes to complete. The phantom hand would work in erratic motions and, upon finishing, make "a wide flourish" and drop the pencil. Afterwards, Fitzroy would feel "a vague sense of release."

Dr. Cory examined the artist during her process. He found evidence that the arm producing the drawings had slight anesthesia and, if working for too long, became completely numb. During one session, Dr. Cory blindfolded her, and the numbness covered her whole body. The professor took this as evidence that the movements were not under conscious control (although it's not clear how instances of numbness support this conclusion).


Fitzroy drew a variety of male and female faces, many of them children's. Sometimes more than one face would appear in a drawing, either in the foreground or as faint sketches in the background. Dr. Cory wrote that, according to professional critics, the portraits had artistic merit. "There is a subtle shading of expression," Dr. Cory wrote, "and a delicate sketching of character in most of [the drawings]." He also described the faces as "distinctly not modern," suggesting they had characteristics of people who lived and died in a previous era. Although Dr. Cory seemed fascinated by the mystical aspects of the case, he was confident the automatic drawings could be explained by natural laws.

In attempting to explain the case of Mazie Fitzroy, Dr. Cory used a psychoanalytic approach. As popularized by Sigmund Freud, the theory of psychoanalysis suggests that abnormal behavior is a product of unconscious conflicts in the mind. Fitzroy's automatic drawings, Dr. Cory proposed, were no exception to this rule. "The [artist] is a woman of strong feeling," Dr. Cory wrote, "and also extremely reserved in the expression of those feelings. This... has provided a complete and systematic repression of her emotional life." According to Dr. Cory, the automatic drawings were a result of Fitzroy's unconscious mind periodically taking control of her hand and expressing her long-repressed emotions.

The spontaneous creation of unfamiliar faces could be explained by Fitzroy's extensive training in art. Dr. Cory wrote, "...as an art student for many years she was constantly exposed to impressions that could easily provide the various types of faces portrayed. The general source of the material is, thus, not far to seek." The faces in Fitzroy's drawings were, according to Cory, most likely based on people she observed in old paintings, with her sketches being vague impressions of the original works. This would explain the "not modern" appearance of Fitzroy's faces. The reason she didn't recognize them may have been because her memory for the originals had been repressed in her unconscious mind, making them unavailable to conscious awareness.

Although Dr. Cory believed psychoanalysis provided an adequate explanation for Fitzroy's case, he also hinted that studies of automatic drawing (in addition to automatic writing) may lead to new insights about the unconscious mind. Dr. Cory wrote, "We are beginning to see that beyond the borders of consciousness there is a vast hinterland... [We] have every reason to believe that whatever may be discovered in this obscure region will fall under the principles of science, even though they may conflict with some of its dogma."

Not everyone approached Fitzroy's drawings from a scientific perspective. Believers in the paranormal suggested the drawings had psychic origins. Fitzroy struck up a friendship with another alleged psychic, Pearl Curran, and the two worked together on a novel called The Merry Tale. Curran was a famous St. Louis woman who wrote many books and poems via automatic writing; however, in her case, she asserted the words didn't come from her unconscious mind. She believed the words came from the spirit of Patience Worth, a mysterious English woman who died hundreds of years prior.

Curran enlisted the help Fitzroy to illustrate The Merry Tale. She would (allegedly) project images to Fitzroy's mind, which would then allow the pencil artist to create automatic drawings depicting the characters in her story. This collaboration went on for years and convinced some witnesses that the two had genuine psychic abilities. Unfortunately, The Merry Tale was never completed and the drawings have been lost with time. Some of the extant transcripts from their meetings suggest that Fitzroy had doubts about her ability to produce the images that Curran wanted. This could be part of the reason the manuscript was never finished.

The claims of psychics should never be taken seriously. Alleged psychic abilities have never withstood a rigorous scientific test, and neither would have Curran's or Fitzroy's had they received such a test. In his paper, Dr. Cory didn't entertain paranormal delusions and opted for a psychoanalytic approach to Fitzroy's case.

Over the years, much of Freudian psychology has fallen out of favor. Whether people have invisible, unconscious conflicts that produce abnormal behaviors is difficult to prove or disprove. However, Dr. Cory may have been onto something with repression. Certainly, holding back your feelings can cause anxiety, and a common symptom of anxiety is numbness in the limbs. Expressing emotion through art may have relieved Fitzroy from this anxiety, accounting for the "vague sense of release" she felt after each drawing.

The fact that she didn't recognize the faces and didn't know what the drawings would look like until she finished, is not so remarkable. It calls to mind a technique employed by some artists called "surrealist automatism," in which the hand is permitted to make random marks on the page until an image takes shape. Much like the case of Mazie Fitzroy, artists using this technique are often said to go into a trance-like state and remain oblivious to what the image will look like until the end. Of course, the process is not entirely unconscious and may involve ex post facto changes to fill in the gaps. Fitzroy may have used a similar technique.

Another possibility is that Fitzroy had "alien hand syndrome," a condition where a person's hand performs seemingly random acts without conscious control. However, unlike a typical case of alien hand syndrome, Fitzroy's hand only took on a mind of its own when she sat down to draw, and that's all the hand would do — draw. Moreover, alien hand syndrome usually turns up in people who underwent a surgery separating the two hemispheres of their brain, as a treatment for severe epilepsy. This type of surgery was not performed in the 1910s, when Fitzroy's automatic drawings began. 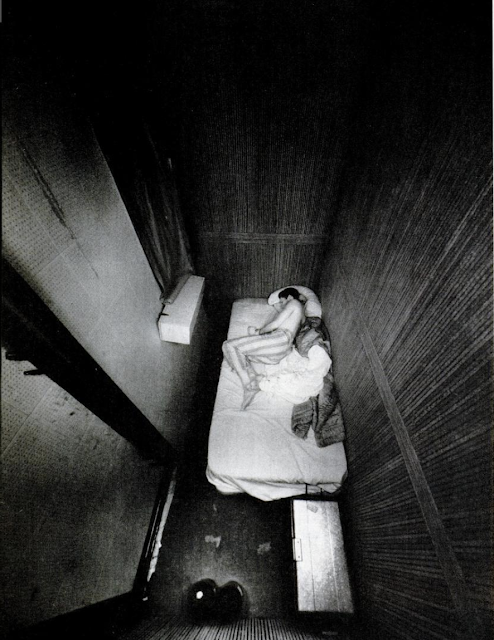 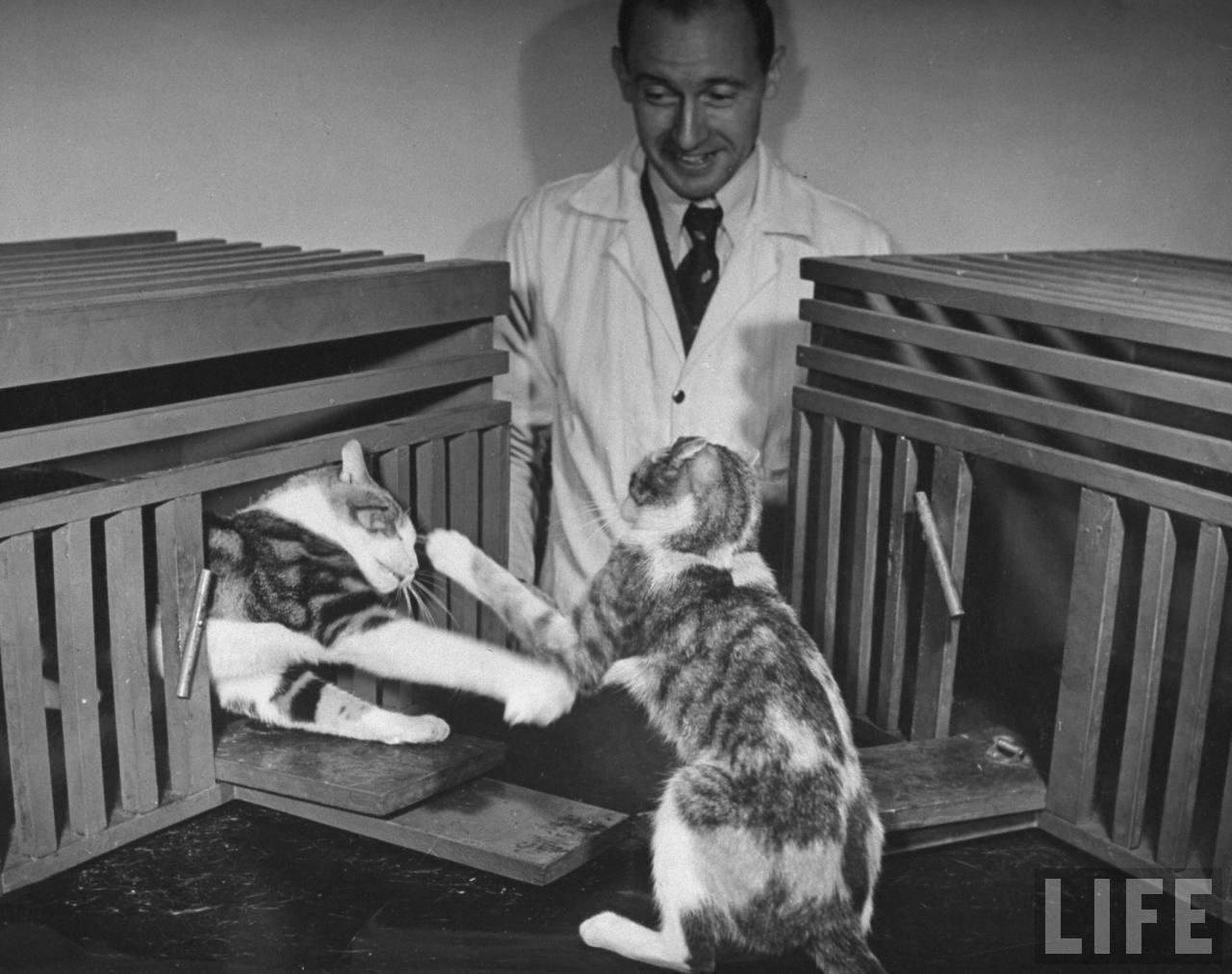 THE "FRIENDLY" AND "COCKY" SOCIAL BEHAVIOR OF CATS

Dr. Charles Nelson Winslow and a couple "catty" subjects Let's face it: cats have a reputation for being, well... catty. But, is this reputation based in fact? Or, do cats have the capacity to get along? In the 1940s, Charles Nelson Winslow looked to answer this question in a unique way — by pitting cats against each other in a game of wits. He wanted to know whether the competition would make them more aggressive, or if cats would betray their reputation and err on the side of kindness. The experiment was performed at Brooklyn College and published in the  Journal of Comparative Psychology  in October 1944. Dr. Winslow was incredibly fortunate to have his experimental method documented with stunning photographs. The photographs, taken by Nina Leen , appeared in a December 1941 issue of LIFE magazine. Here, they are presented again, giving us the opportunity to revisit Dr. Winslow’s experiment in all its cat egorical glory. WHY STUDY CATS? One of Dr. Win